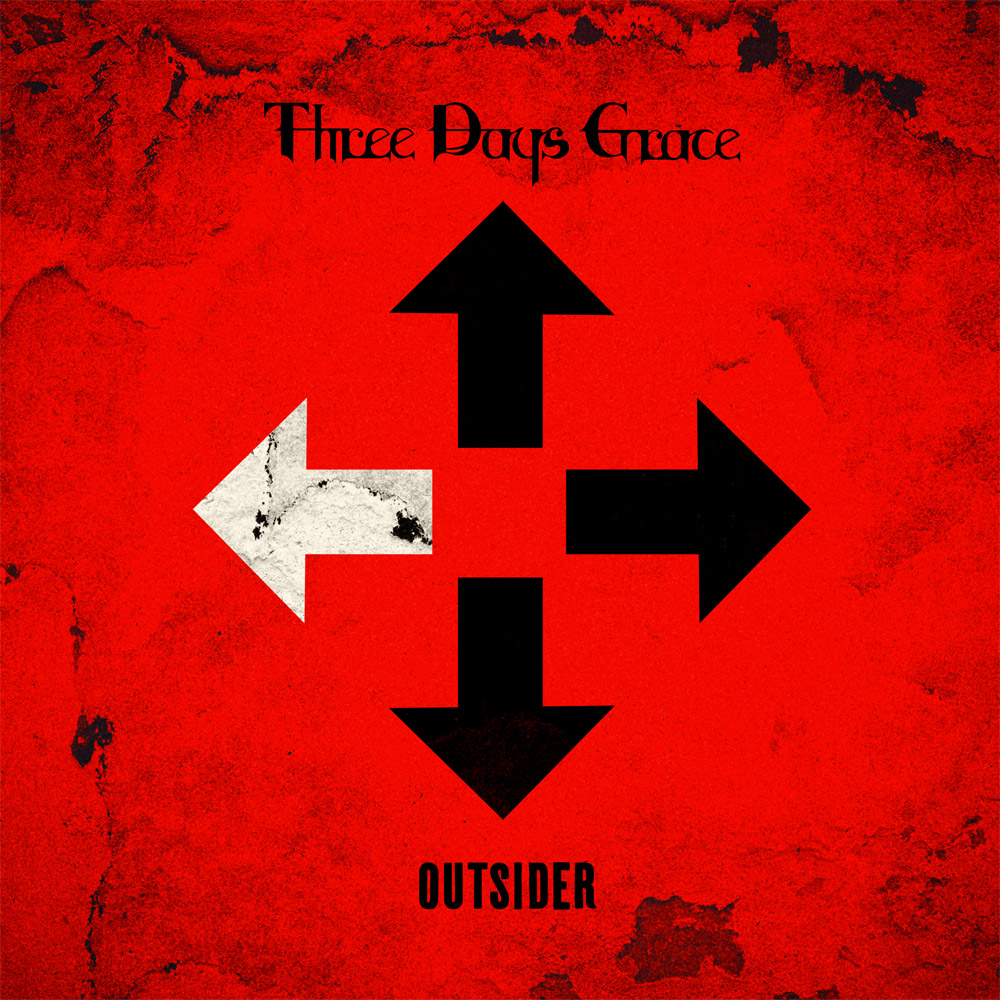 Outsiders always leave enduring impressions. By veering away from the pack, these mavericks confidently lead the charge for others to follow. Since 2003, Three Days Grace has staked a spot amongst the hard rock vanguard, quietly breaking records, toppling charts, moving millions of units worldwide, and making history by holding the all-time record for “most #1 singles at Active Rock Radio ever” with 13. The Ontario, Canada quartet—Matt Walst [lead vocals], Barry Stock [lead guitar], Brad Walst [bass], and Neil Sanderson [drums, percussion, keyboards, programming]—continue to blaze that trail on their sixth full-length album, the aptly titled Outsider [RCA Records].

“To me, Outsider represents the journey to find your place,” says Brad. “The world feels crazy at times. We try to get away from that every once in a while. We do our own thing, and we’re comfortable doing it. We have always looked forward—and not backwards. That’s an ongoing theme for us here.”

“It’s what we’ve done in many ways by being on the outside,” agrees Neil. “This is all about taking a step back from life’s madness without destroying yourself, cutting everyone off, or going crazy. You get a break and find the space to create.”

That’s exactly what the musicians did in the fall of 2016. Instead of congregating in a downtown Toronto rehearsal space, they initially wrote in a converted garage behind Brad’s house located two hours from the city. Eventually, they retreated to Neil’s 90-acre farm to further hone ideas. Following daytime snowmobile trips, the guys often sat around bonfires with acoustic guitars, tapping into the wild spirit surrounding them.

“We grew up hanging out in the woods and building fires,” smiles Brad. “Home is where the heart is. This is where we’re most comfortable. We were able to focus on our craft. We spent more time writing this than any other project. It has a sense of seclusion to it. It’s like we naturally migrated back.”

As the songs took shape, the band packed up and headed to the remote Ontario’s Jukasa Studios. In order to capture that energy, they called upon longtime friends and collaborators. Producers Gavin Brown and Howard Benson returned to the fold, with Mike Plotnikoff engineering and Chris Lord-Alge on mixing duty.

“We put our ultimate dream team together,” smiles Barry. “These guys have all been a part of the family for a long time. It was amazing to have everybody onboard.”

“That production team hasn’t happened since One-X,” adds Neil. “We were lucky to get this group together. It made sense because we were in a similar headspace.”

As much as it upholds tradition, Outsider represents progression for Three Days Grace. Marking his second offering as part of the band, Matt showed “a new level of confidence and brought a ton of ideas,” according to his brother Brad. Meanwhile, Neil expanded the signature electronic palette, integrating analog synths and standout programming with the help of Rhys Fulber [Fear Factory, Frontline Assembly]. He casually nodded to electronic influences as diverse as Nine Inch Nails, White Zombie, Bring Me The Horizon, Lana Del Rey, and a surprising cult classic…

“We really love the movie Lost Boys and its score,” smiles Barry. “The whole thing has this dark, spacey, and eerie vibe. Those dudes were vampires and definitely outsiders!”

“I’ve always loved darker industrial music,” Neil elaborates. “I devoted a lot of time to those sounds and finding ways to integrate them. It was using these elements to create dynamic in the songs and not just overlaying them. You’ll hear moments where the keyboards or wide synth sounds are featured. Then, the guitar hits you in the chest. It made everything more interesting.”

“You wake up every day in a monotonous situation and resent what’s ahead,” Neil reveals. “You’re intimidated. However, you don’t have a choice but to put your boots on and face it, because there is no other option. It’s emotionally charged. A lot of this music is about yearning to escape, yet not knowing what’s on the other side. You can’t take your life, so you decide to make the jump into the unknown.”

“It comes down to surviving every day and just not giving up,” Matt concurs. “You can’t allow the bad thoughts to take over. We all go through trials and tribulations. The key is to keep going.”

“I Am An Outsider” serves as a clarion call for the four-piece with its heavy and hypnotic chant. “It’s the main theme,” explains Brad. “You break away from the inner circle and find your own path.

There are ups and downs, but you end up where you’re meant to be.” Then, there’s “Infra-Red,” an airy production gives way to a sharp seesaw of guitars and luminous vocals. “There are some people you just connect with,” says Matt. “You get along with them instantly, because you understand each other. ‘Infra-Red’ is finding that person who gets you.”

Elsewhere, the venomous “Me Against You” hinges on a hypnotic groove and scalding chorus, while the ethereal “Love Me or Leave Me” transmits loneliness encased in swaths of synths.

Given this undeniable unpredictability, Outsider feels right at home alongside a catalog of fan favorites from Three Days Grace. In 2015, Human marked the group’s second straight bow at #1 on the Billboard Top Hard Rock Albums Chart as well as their fourth consecutive debut in Top 20 of the Top 200. It spawned two #1 singles “Painkiller” and “I Am Machine,” signaling their 13th overall and 5th consecutive number ones on the Active Rock Radio chart. Moreover, the four-piece consistently averaged a staggering 3.9 million monthly listeners on Spotify—remaining “one of the most listened to rock bands in the world.” In 2012, Transit of Venus soared to the Top 5 of the Top 200 and garnered a nod for “Best Rock Album of the Year” at the Juno Awards. The seminal One-X [2006] notched an RIAA triple-platinum certification as Three Days Grace [2003] was minted platinum and Life Starts Now went gold. To date, their veritable arsenal of number one includes “Chalk Outline,” “The High Road,” “Misery Loves My Company,” “World So Cold,” “Good Life,” “Break,” “Never Too Late,” “Animal I Have Become,” “Pain,” “Just Like You,” and “Home.”

In the end, Outsider speaks directly to that army of fans around the globe.

“I’d love for them to relate to it,” Brad leaves off. “I want people to feel like they can put it on and know they’re not alone. We’re on this journey as outsiders together.”

“Hopefully, this music can help people,” concludes Matt. “It bonds us all, and there’s no better way to connect.”